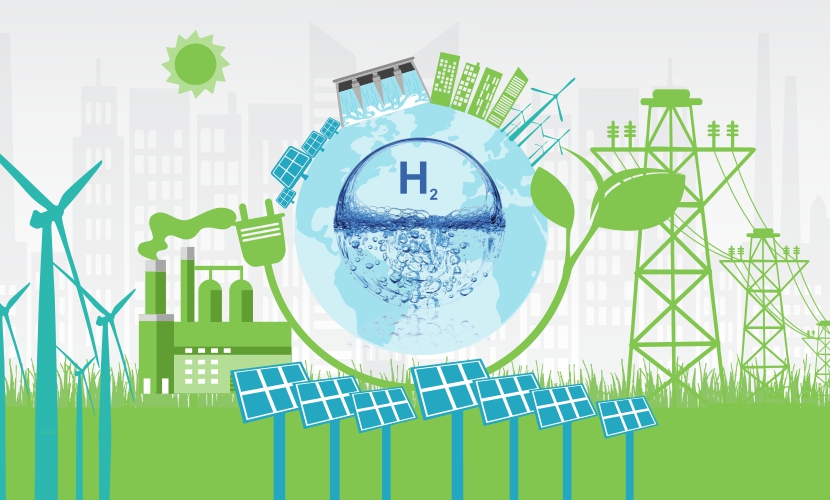 The world is facing major problems related to global warming, climate change, anthropogenic greenhouse gas emissions, and environmental degradation. They implicate a major worry to take immediate measures to rectify the ways and methods to build a clean world for the future generation to live blissfully. The technological revolution paves a way to combat the current terrible situation using numerous sustainable measures by the advancement of materials. The clean energy transition is mostly adopting in the transport and mobility sectors for reducing the emissions of vehicles. The present scenario of the global climate sets urgent needs to demonstrate country-wise a long-term policy for clean, renewable, and net-zero waste power generation in line with climate neutrality goals.

From Zero to Infinity: Customized Atomistic Calculations for Crystalline Solids —Applications to Graphene and Diamond 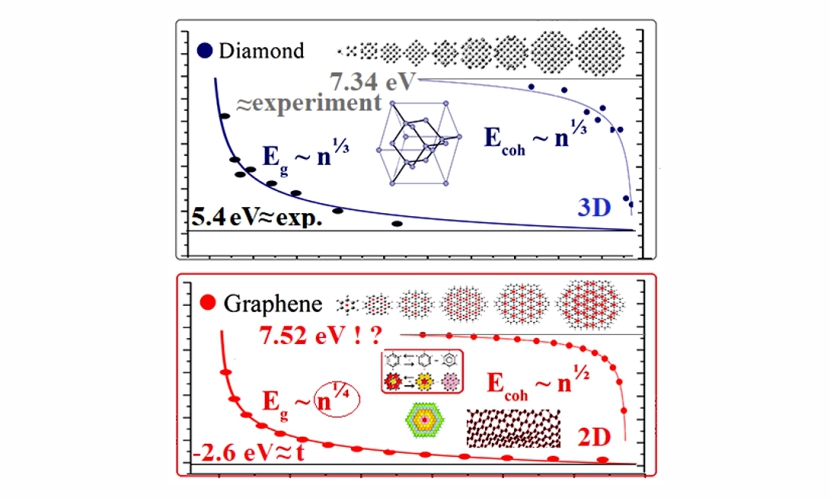 We demonstrate that a suitable atomistic method with judicially selected nanoclusters/ nanocrystals (in real space) supplemented with general symmetry and dimensionality arguments, can give surprisingly good results for macroscopic properties of the infinite crystalline solid, such as bandgaps, cohesive energies, as well as aromaticity (if any), at minimal computational cost and maximum physical insight. For graphene on top of these properties the present approach can successfully describe in real space and illuminate many of its exotic properties, which are usually introduced in k-space, such as Dirac points or topological insulators. An early version of this methodology has been very successfully applied and extrapolated to Si, Be, BeH, CdSe, MgH, crystals and nanocrystals, with almost chemical accuracy in most cases. Here, after a pedagogical and critical review of the earlier results, we introduce a new combined and expanded approach to comparatively describe the electronic and cohesive properties of diamond and graphene. For the later a drastically enlarged sequence of “nanocrystals” of well-chosen geometries and sizes up to 1440 atoms or 8190 electrons is used to verify earlier predictions and results.  We have obtained in a simple and fast way the bandgap (5.4 eV) and the cohesive energy (7.34 eV/atom) of diamond with almost chemical accuracy; and we have fully rationalized (in a different perspective and prospective) the electronic and cohesive properties of graphene, with a tentative value of cohesive energy of 7.52 eV/atom. Strangely enough this value is larger than the one for diamond and is currently under investigation. Finally, we suggest that this methodology in its current simple and transparent form can be a first-line diagnostic, functional, and inexpensive computational tool. This is particularly true for quick assessments and comparative estimates, size-dependence studies, or cases where standard k-space methods or other advanced techniques either fail or demand unavailable computational resources. 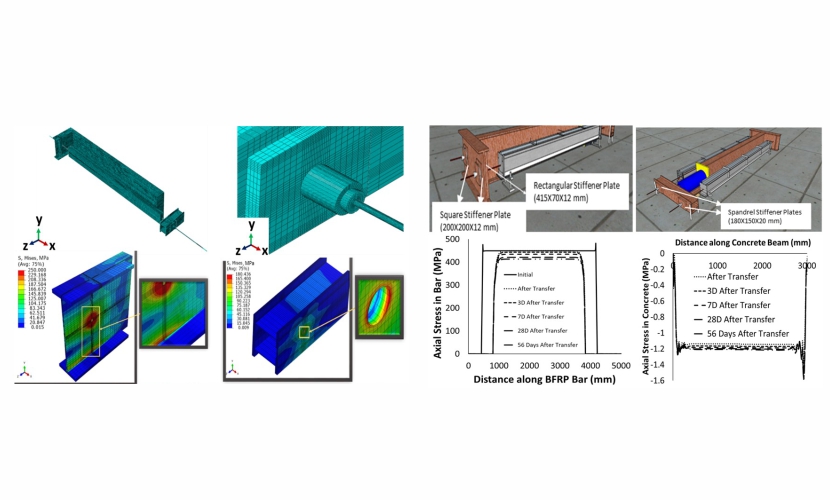 This work is a vital step in enhancing the potential use of a newly developed organic basalt fibre reinforced polymer (BFRP) bars for prestressed concrete applications. In the present study, a test setup has been designed using finite element analysis (FEA) and the various steps of prestressing such as initial prestress, effective prestress and the time dependent effects have been appropriately simulated in the finite element (FE) model. The configuration details of the test setup, such as the size and orientation of the sections and the location of the stiffener plates have been thoroughly investigated. A robust design of the setup has been established based on the FEA results. Subsequently, the FE model has been utilized to predict the transfer stage parameters for concrete beams prestressed using BFRP bars.The transfer length has been predicted from the FEA results to be 24db and 26db (where, db is the diameter of bar) when measured using the BFRP bar strains and the concrete strains, respectively. An end slip of 0.3mm has been obtained after the prestressing of concrete beams. The designed test setup will be later fabricated and utilized to perform experiments under laboratory-controlled conditions.

On the Effect of ECAP Processing Temperature on the Microstructure, Texture Evolution and Mechanical Properties of Commercial Pure Copper 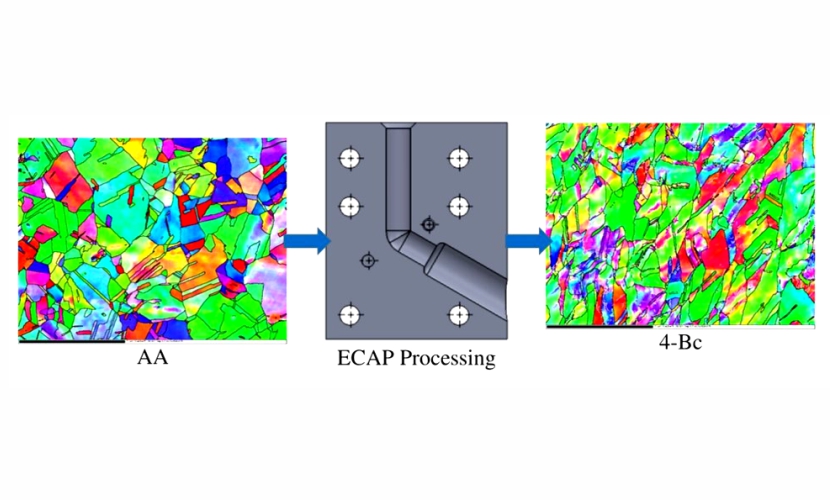 In this study, the severe plastic deformation (SPD) behavior of commercial-grade pure copper processed using equal channel angular pressing (ECAP) was investigated. The copper rods were processed for up to 4 passes, both at room temperature and 200 oC. The microstructure and texture evolution were studied using a field emission scanning electron microscope (FESEM) equipped with an electron back scattered (EBSD) detector. The effect of ECAP processing on the tensile properties, micro-hardness, and impact toughness was studied.  After 1 pass, the average grain size of the rods was determined to be 2.694 and 3.9066 μm at room temperature and 200 oC, respectively. In addition, after 4 passes through ECAP, the strength of the ECAPed samples increased to 381 MPa, and 330 MPa at room temperature and 200 oC, respectively; and the Vickers’ micro-hardness at the peripheral areas increased to 158, and 126, respectively. In the other hand, the experimental findings revealed that the number of ECAP passes has insignificant effect on the impact energy. 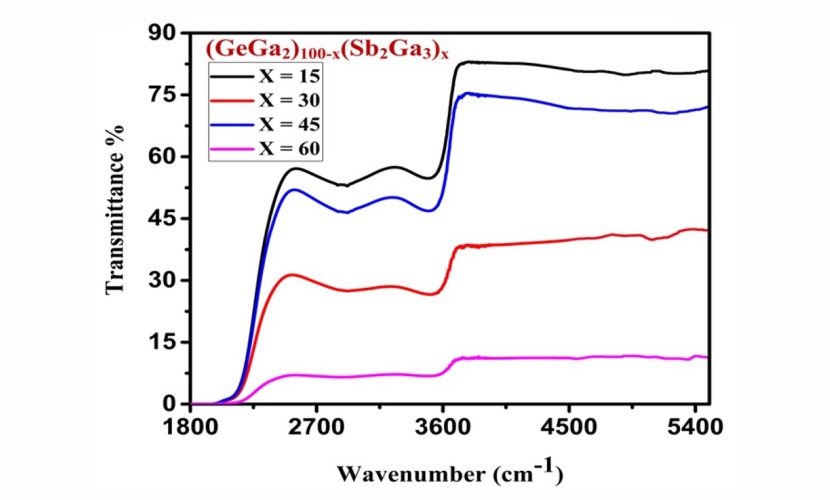 The traditional melt-quench technique was used to synthesize non-oxide (Ga2Ge)100-x(Ga3Sb2)x
(x = 15, 30, 45, 60) glass alloys. The vacuum thermal evaporation unit was used to obtain thin films of prepared sample for investigation of optical properties. SEM, XRD and DSC technique were used to find the thermal and structural properties of the materials. The linear properties like optical bandgap, extinction coefficient for prepared samples have been studied in present paper of Ge-Ga-Sb for application of optoelectronics. The impurities present in the prepared thin films were defined by FTIR transmittance spectra. The extinction coefficient (k) value decreases with increase in Sb concentration while absorption coefficient (α). It was noticed that value of energy bandgap (Eg) derived from Tauc’s plot varies from 2.9 eV to 1.25 eV. Urbach energy is inversely proportional to the bandgap of the materials. As the Sb concentration increases the band gap goes on decreases which result the increase in Urbach energy. Mott and Davis model has been used for explaining decrease in energy gap of prepared glassy alloys. 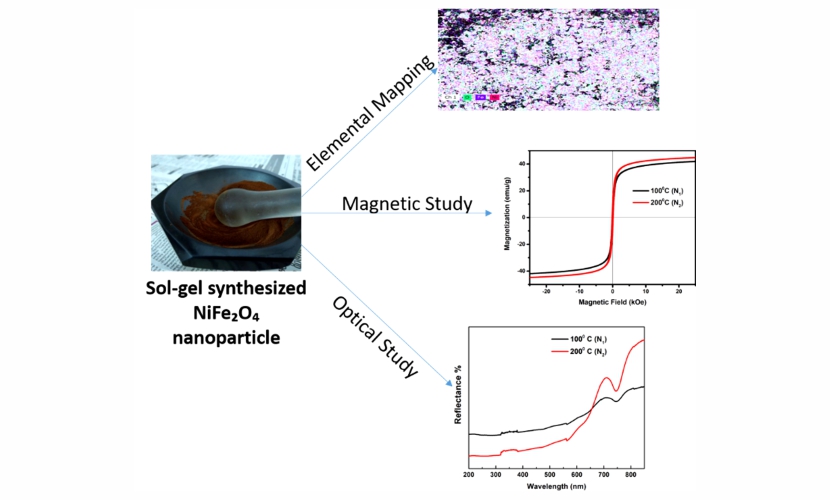 Nickel ferrite (NiFe₂O₄) nanoparticles were synthesized using the sol-gel auto combustion method, and the powdered samples were calcined at two temperatures, 100°C and 200°C. The structure of nickel ferrite nanoparticles was determined using X-ray diffraction (XRD) patterns. The nickel ferrite nanoparticle size was calculated using the Debye-Scherrer formula and was found to be 15.53 nm and 17.14 nm for 100 °Cand 200 °C. Field Emission Scanning Electron Microscopic (FESEM) analysis reveals that the samples exhibit spherical morphology with crystalline in nature and also show some agglomeration. The phase formation of nickel ferrite nanoparticles was further confirmed from the energy dispersive x-ray (EDAX) spectra which shows strong peaks for the existence of all the elements in it. The work investigates the magnetic properties of the samples and both the samples exhibit ferromagnetic behavior. The optical band gap obtained for the samples is 2.5 and 2.6 eV for N1 and N2 samples. The antimicrobial activity especially the anti-algal effect of NiFe₂O₄ nanoparticles on freshwater microalgae Chlorella pyrenoidosa in a dose-dependent manner is also reported. 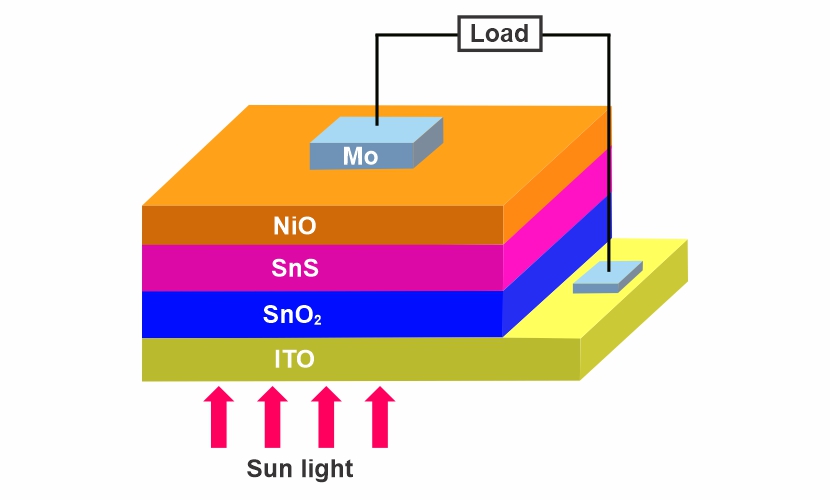 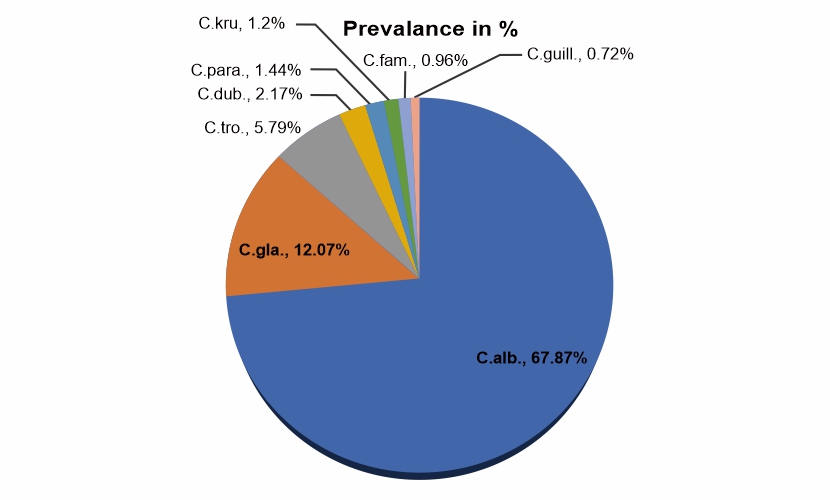 Candida is the most common yeast existing as normal flora of oral cavity. Sometime Candida yeast can cause diseases in the oral cavity.  Immune system is weakened due to widespread use of antibiotic, immunosuppressive drugs, age, genetic, malnutrition and hormone disorder as well as HIV infection. Immunocompromised person are more sensitive Aim of the study was to evaluate the prevalence of Candid yeast in those persons that are habitual of chewing gutka and non-habitual. For this study, 450 oral rinse samples were collected aseptically in sterile test tube. These persons visited in dental OPD, Kalka dental college, Meerut. Groups were divided on the bases of habitual and non-habitual of gutka chewer and further clinical history of patients was recorded such as age, gender and socioeconomic status. Each sample were diluted and inoculated on Sabouraud’s Dextrose Agar medium by spread culture technique. The samples were further processed for colony characterization and biochemical test to identify Candida species. As well as measurement of pH level of the oral rinse sample were recorded with pH strip method. 414 isolates were collected from 450 samples, eight Candida species were isolated. Candida albicans were observed as dominant yeast, showed creamy colored, smooth colonies on Sabouraud’s dextrose agar medium. And observed germ tube test, psuedohyphae chlamydospore and various sugars fermentation as well as some other Candida yeasts were also isolated.